If a Child Lives with Hostility, He Learns to Fight 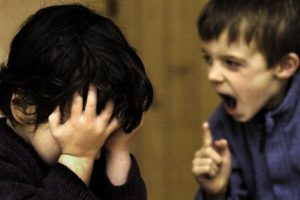 Rickie, a high school freshman, is overwhelmed, angry, and packing to run away; he’s uncertain exactly where he’s headed.  Rick’s Dad, Matt, sees his son’s preparations and says “You go out that door and I’ll break your legs!”  Sue Ann, an academically gifted high school junior, is returning home late from a party. Her Mom, Kate, glares at her as she enters the kitchen.  She then impugns her morals and grounds her for the remainder of the school year.

Matt and Kate have been married for over ten years.   They have three children, financial pressures, and two chronically ill parents.  The tone of their interaction is often strident and clipped.  Their style of parenting is authoritative and sternly judgmental.  If questioned each of these parents undoubtedly would say that he has the children’s best interests in mind, regardless of the manner in which the children are addressed.  The destructive elements in their communication generally would be unrecognized.

Did you know that the foundations for their parenting skills as well as yours were established during childhood?  None of us were given a blueprint for effective parenting.  None of us can meet all of the emotional needs of our children. Thus, in this regard we are all inadequate!

Unless there has been some form of intervention, parents tend to parent in the same manner in which they were parented.  Our role models are rooted in our families of origin.  It is here that all parents were provided with powerful messages about what is acceptable communication. Norms were established at this time for what is appropriate and constructive communications, both verbal and behavioral, toward children and toward the world at large.

Aggression and bullying are often the options for those whose communication skills are inadequate. This default style is an unsuccessful attempt to compensate for a range of inadequacies surrounding control, power and self-worth.  There are those who view various expressions of aggression as efficiently solving conflicts of controlling children’s behaviors. However, this leads to long-term problems for the child himself and for how he learns to deal with the adult world.  When this occurs the child is left with two options, either he maintains his position of victim in the family or he takes on the role of aggressor.  Neither alternative provides the child with the ability to establish loving relationships and to create a meaningful life. Unless there is professional intervention involving emotional relearning this pattern generally becomes rooted in the child’s adult personality.

When anger and aggression characterize a parent’s behavior, this dynamic becomes the boiler plate for a child’s dealing with others. It is this familiar style of relating that he implements during times of stress and conflict.  Parental displays of abusive, aggressive and bullying behavior at home are often mirrored in the school yard, the class room and the ball field.  National and international research on bullying indicates the increasing evidence of family connections and bullying.  Elizabeth Sweeney, a University of Cincinnati master’s student in sociology, presented her findings at the 103rd annual meeti9ng of the American Sociological Association.  In England, Greece, Norway, Japan, South Africa and the United States children between the ages of 9-16, raised by authoritarian parents who were themselves demanding, controlling and unresponsive, were most prone to bullying themselves.  Children who experience hostility, abuse and other forms of aggressive behavior are most likely to model that behavior in their peer relations and to continue that style of parenting into their own families as adults.

Are your relationships with others characterized by aggression, abuse and vicious repetition?  Is this the legacy you had hoped to leave to your children?  This style need not be maintained.  Regardless of what your feelings are, positive, negative and all in between, they are just feelings.  They do not have to nor should they drive your behavior and compromise your relationships.  Alternative behaviors are there for the learning; emotional relearning in terms of how you process your feelings is fundamental to change.   Your life can have a respectful, loving quality, while you continue to problem solve. The first step is up to you!

I am a Manhasset therapist, call me at (516) 627-1145 for a complimentary consultation to discuss any of these or related topics.

Does Resentment Surface as You Walk through the Door? New Patterns, New Opportunities, New Beginnings

If a Child Lives with Criticism, He Learns to Condemn

The Apple Doesn’t Fall Far from the Tree…Whether in the Livingroom, the Boardroom or the Classroom! -Part 1